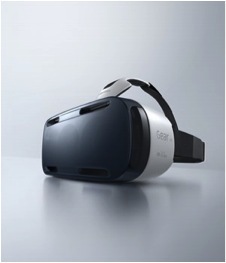 Samsung has entered the wearables market with a variety of devices, including the Gear VR headset. Aimed primarily at the gaming market, the headset relies on the Galaxy 4 Note phone for connectivity. Samsung hopes to expand beyond the gaming market into enterprise applications.

Wearable devices—technology-embedded watches, glasses, and clothing—continue to gain traction in the consumer market. It makes sense that on-the-job use would be the next market, and some early adopters are already using these devices in that setting. Samsung, in particular, is pitching its wearable products, including smart watches and virtual reality headsets, to enterprise users.

Steve Lucas, global president of the SAP Platform Solutions Group, at a recent keynote speech at SAP’s TechEd && d-Code Vegas, showed how the Samsung Gear S smartwatch can be applied to businesses and used with analytics and cloud resources using Samsung’s enterprise SDKs.

But the company also is working on its Gear VR headset, a virtual reality wearable device reliant on the Galaxy Note 4 for both its display and processor. The headset uses the Oculus SDK for Mobile. It has its own controls, eliminating the need for any external add-on devices such as a joystick. It also is equipped with a touchpad and separate navigation button as well as controls for focus and volume.

Virtual Reality for the Business World?

Despite making a distinct impression that the headset is aimed at the gaming market, Samsung says it wants the Gear VR headset to be used in business settings. Computerworld reporter Matt Hamblin explains:

Samsung officials say it will have real value for the workplace. Officials said it could be a useful tool for surgeons preparing for real-world surgery in a virtual way or for training police in tactics. One airline is investigating the Gear VR as a tool to give passengers a quick glimpse of how the first-class cabin will soon be upgraded, officials said.

Because user interfaces have to be designed specifically for each device—Samsung offers everything from headsets to tablets—Samsung’s developer environment is, comparatively speaking, fragmented.

For virtual reality to really cross into the mainstream, it’s gotta be more than just really awesome, killer games. … What is the most important use case in VR? We haven't figured it out yet, but there are lots of ideas. … Everybody is really, really thirsty for this … It’s an interesting programming challenge and [developers] see new opportunities to do things that weren't possible before.

The Price is Right

Samsung has been relatively quiet about its plans for the Gear VR. At its developer conference on November 10, the company announced that it would be supporting the Gear VR with a worldwide series of cameras, allowing users to “teleport” to places and events. The device will sell for $199 on its own, or $249 in a bundle with a Bluetooth Gamepad, according to CNET.

Most of the early adopters of the Gear VR, according to CIO, are entertainment-related content production companies such as Marvel, IMAX, DreamWorks Animation, and Cirque de Soleil Media.