5 Bitcoin and Blockchain Topics You Should Care About

Bitcoin and blockchain technology have the potential to revolutionize the way we think about money, transactions and online identity. Let’s dive in.

Here are the topics we will explore:

In 2009, an unknown individual under the pseudonym Satoshi Nakamoto published the first proof of concept for Bitcoin technology. To this day, his identity remains a secret, but his project became for currency what the printing press was for books. As business technology expert, Don Tapscott, puts it, “blockchain [and Bitcoin] technology facilitates peer-to-peer transactions without any intermediary such as a bank or governing body.”

After Satoshi left the project in 2010, it was taken over by developers and became open-source code that is publically viewable and able to be modified by anyone. This decentralized development came after the financial crash of 2008, which created a fundamental distrust of a centralized economy. Below is an excerpt from Satoshi's original whitepaper: 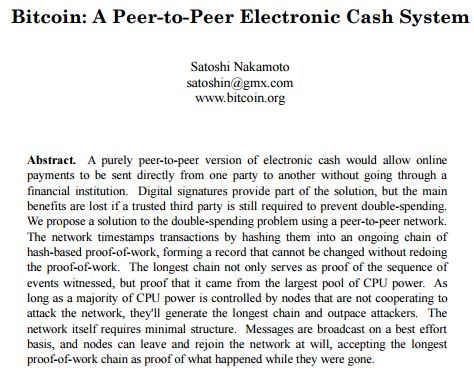 So, what exactly are Bitcoins? Bitcoins are not merely currency; they are units of accounting for anything you program them to be. One Bitcoin can be broken into 100,000,000 individual pieces, each programmable into specific units of currency, stock  or almost anything else you can imagine. There is a published ledger of Bitcoin transactions that are published to a distributed network of participating computers. Once every minute or so a batch of transactions are released in a block to be validated by the network and added to the blockchain. (More on blockchain in a moment.)

Using Bitcoin technology, you could deliver pre-programmed currency for the specific purpose of healthcare expenses to a patient—and through the blockchain ledger system, this currency could only be used for this purpose. You could even program the currency in such a way that it expires after a certain period of time to prevent hoarding of resources.

How Does Blockchain Work?

So what exactly is this “blockchain”? Blockchain is the foundational technology behind Bitcoin. This interconnected web of computers and servers is decentralized and runs transactions against a single, public ledger. A copy of this ledger is in every node of the blockchain network, and for every transaction, every other node must agree with and verify the transaction.

These transactions are verified by lottery; miners are randomly awarded the ability to add a block to the chain and verify a transaction to redeem the Bitcoin transaction fee. This combination of decentralization and pubic transparency makes blockchain the most fool-proof financial system to date.

How are Bitcoins Created and Mined?

Where do Bitcoins come from? Basically, this open source blockchain system needs a very large base of “miners” to verify transactions and protect the integrity of the ledger system. Miners are individuals or groups of people who volunteer computing power to host the ledger and verify transactions. Bitcoins are awarded at a steady, predictable rate based on the complexity of the verification process (the math gets exponentially more complex with time). The number of Bitcoins in circulation, along with every transaction ever recorded, is publicly available and updated in real-time.

You may have heard of Bitcoins as an investment option similar to the stock market. Initially, when the network needed to grow, the computing power needed to solve these complex problems and verify transactions was relatively low. This meant that a decent investment in computing power to “mine” Bitcoins would give a tremendous return.

Eventually systems to mine Bitcoins have become more powerful, even to the point of things like Bitclouds being created, where you can buy server space on a massive network to mine. This explosion of users has gradually diminished the investment potential for individuals without server farms at their disposal. The value of Bitcoin compared to the US dollar has continued to climb, but the potential to mine for Bitcoin and make a profit has fallen. As you can see from the graph above, the price is fairly volatile as compared to a centrally controlled currency. 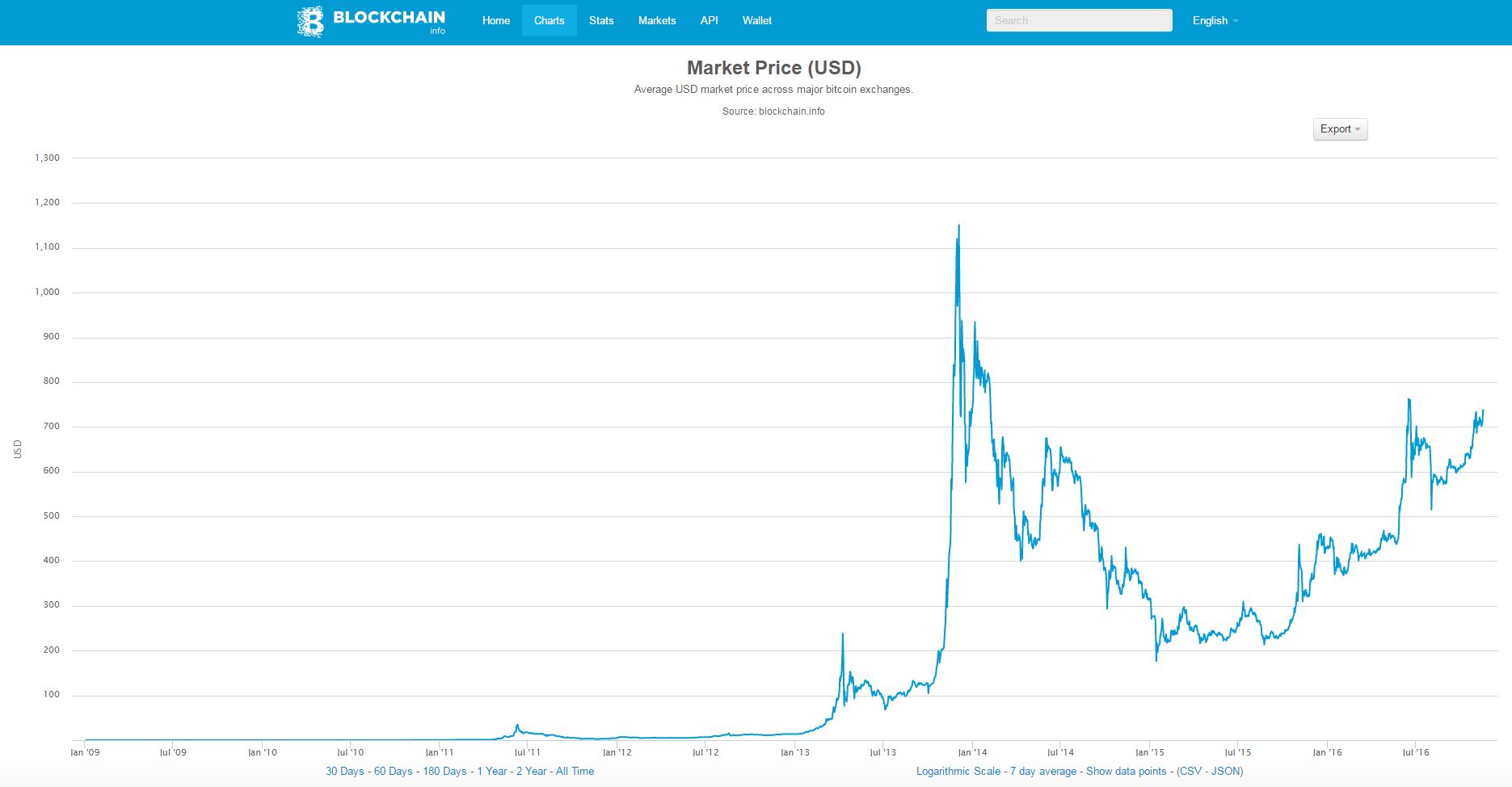 What Businesses are Using this Technology?

Bitcoins are increasingly gaining acceptance as currency, and blockchain is gaining ground as a valid business platform for very innovative, groundbreaking companies. Here are a few businesses who are putting Bitcoin and blockchain to use.

Nasdaq LINQ is a huge step forward in the blockchain experiment. Without getting too technical, LINQ serves as the trading platform and record keeper for pre-IPO (Initial Public Offering) companies. What benefit does this have for Nasdaq and companies? LINQ eliminates a great deal of legal, accounting and facilitation costs of pre-IPO investment. This private blockchain creates a substantial historical record of all trading.

OpenBazaar is an open-source project to create a decentralized network for peer-to-peer commerce online—using Bitcoin—that has no fees and no restrictions. It circumvents the traditional model of ecommerce in sites like Ebay or Amazon, who require credit cards and PayPal, and directly connects the buyer and seller. It eliminated the middleman by using a third party verifier to mediate the exchange of goods. 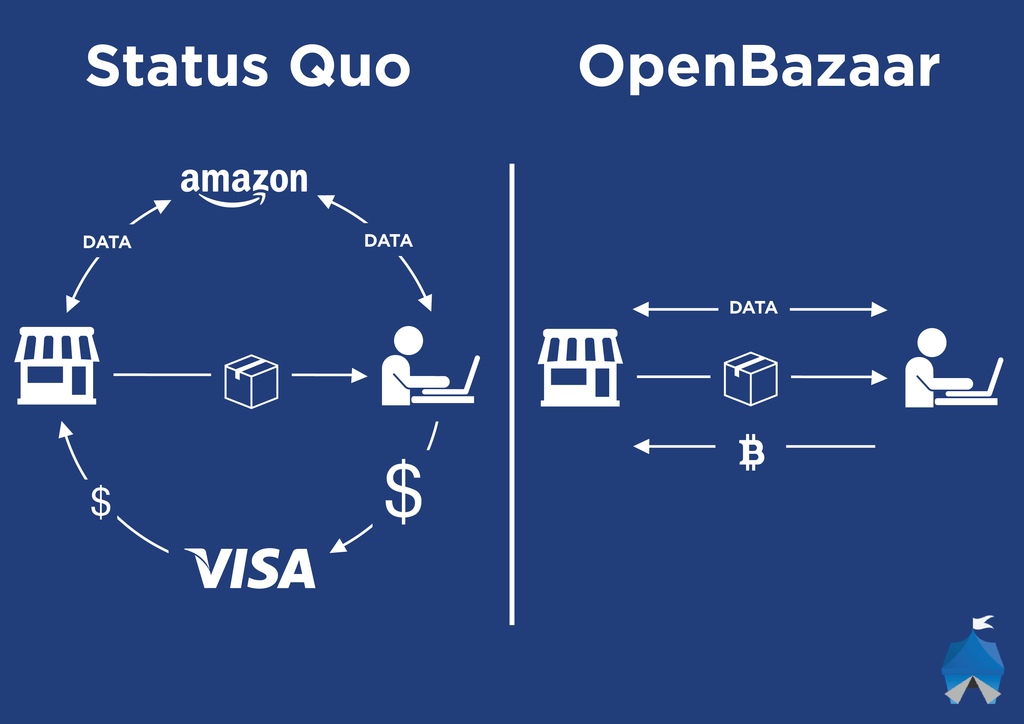 To keep buyers and sellers safe, Bitcoins are held in a “multisig” (a multi-signature queue) which is basically a queue that only releases payment when 2 of the 3 participants agree to and sign off on the exchange. Contracts are written and signed digitally and payments are held in the multisig until the goods arrive and all are in agreement. This prevents scams and allows an independent 3rd party to moderate disputes.

Ujo builds a home for artists that allows them to own and control their creative content and be paid directly for sharing their musical talents with the world. Ujo noticed the tension between publishers, labels, PROs, legislators, DSPs, artists, and fans and set out to rethink the music industry via blockchain.

Their first prototype they created to demonstrate proof of concept was Tiny Human by Imogen Heap. They used the Ethereum Blockchain to facilitate the purchase licenses to download, stream, remix and sync the song. Payments were automatically split on the blockchain and sent directly to the artists and her collaborators with no middleman.

A Future with Bitcoin

Can Blockchain Change the World?

We live in a world where our online IDs are in the hands of government, social media and banks, and we rely on them to keep us secure. Blockchain IDs put you and only you in control. You can therefore store all of your passwords and any other personal information securely on the blockchain, eliminating the need for passwords in everything from Skype to Facebook, Twitter and more. In the future, these ID services could be applied to government services, medicine and any other record keeping agency.

The real potential of the blockchain system comes from its foundation of decentralization, transparency and an unrestricted market. It exists to combat greed and middlemen and to give individuals ultimate control of their identity and activity. In a foreseeable blockchain future, we will see a world where our medical records are immediately available if we are in an accident; where online voting was possible; and where transparency was paramount and greed is disincentivized.

What is your opinion? Is the blockchain a perfect solution? Is it flawed? Comment below, we would love to begin the discussion!

Bitcoin and blockchain technology are very new and their full potential is not yet known. Whether used as database technology, payment facilitation or a use that we do not yet know, our team at Progress will stay on top of data connectivity developments and keep our eyes open to the future. One real-life example of our future-oriented outlook centers around the growing need for hybrid connectivity.

The Progress DataDirect team foresaw a future where companies wanted to move to cloud services, but were stuck in a legacy system that was nearly impossible to leave behind. That’s why we released Hybrid Data Pipeline, the industry’s first lightweight, embeddable, self-hostable hybrid connectivity solution that you can run in the cloud or on-premises from behind your company firewall. Learn more about Hybrid Connectivity and how it can propel your business technology forward.

Explore The Future of Data—Hybrid Connectivity 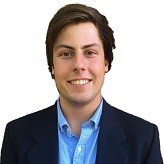 Austin is a content strategist, social promoter and marketer at Progress with a passion for technology, data visualization and music. He keeps up to date on the data connectivity industry and discusses related topics in a visually appealing, thorough and easily understandable way.