For all you data geeks out there, there’s a new world wide data mining tool on the block, released just last week! Wolfram Alpha was developed by scientist Stephen Wolfram and according to their site, “Today's Wolfram|Alpha is the first step in an ambitious, long-term project to make all systematic knowledge immediately computable by anyone.”  It’s nothing like Google actually, as Google is searching data and this is computing data, but this could have a similar effect on the power of data and the internet! Computing answers based on data is powerful, and once you get the hang of it you can see that they’re nothing alike, but it’s really fun: 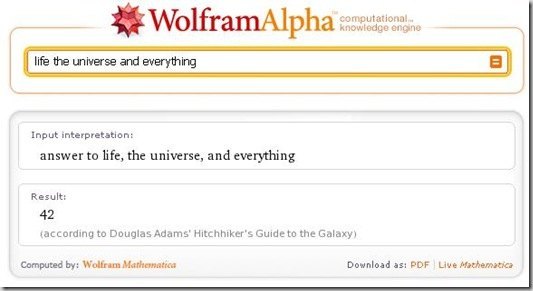 Hitchhiker's aside, this is one tool that has really neat applications for getting not only the data, but the relationships between the data. For instance, put up PRGS and Apple and you’ll see the relationships between the companies as well as their individual data. Or, type in your name and see the number of those currently living with your same name (male or female) as well as when your name was popular charted over time. You can also export all these reports via PDF which is also nice so you can take it with you!

Go ahead, click away and give it a try – something new to play with in the data space is good news – looking forward to where this can go!