The rise of algo trading in Asia - first stop Mumbai

I’ve just completed a three city Asian tour, in Mumbai, Tokyo and Beijing. The purpose was to promote Progress’s business in capital markets, in particular both Apama and our Responsive Process Management suite. I’m going to give my impressions on those markets – first up is Mumbai and the Indian market for electronic trading.

Before I start with India though, I’d like to share an interesting piece of academic work I came across. We do hear a lot about the rise of Asia economically, particularly the “big two” of India and China.  Many predict that China will become the world’s biggest economy in the next 10 years and that India’s population will exceed China’s by mid century. Both economies are predicted to grow between 8-10% in 2011. The predicted long-term shift in relative economic fortunes is nicely illustrated by some work done at the London School of Economics in 2010, a graphic from which is shown below. 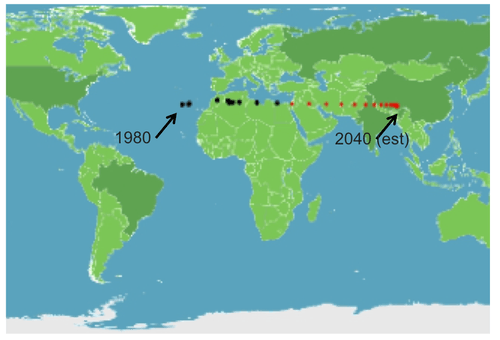 Professor Danny Quah calculated the “the average location of economic activity across geographies on Earth”. Put another way, this shows the “economic centre of gravity” and shows its mid-Atlantic position in 1980 and its predicted position in the middle of Asia by 2040. The economic power shift is on.

Back to my trip, and my first stop in Mumbai, commercial and financial capital of India. I wrote on the growth of electronification and algorithmic trading in India last July. Since then the market has progressed. Progress has acquired its first clients in capital markets in India using Apama for trading and the market itself has evolved and liberalised. Last year I criticised the policy of the biggest stock exchange, the National SE, for its “algo approval process”. I thought this was a poorly structured attempt to protect the markets from “rogue algos” and would stymie development. I'm pleased to say that the NSE has now relaxed this policy (the latest version of which can be found here). A further significant development has been that now both equity exchanges, the NSE and the Bombay SE, allow smart order routing from co-location facilities at each exchange to one  another. This was previously not allowed by the NSE. There is also evidence that the adoption of algorithmic trading is changing the way the market works – manual arbitragers are heading towards extinction and arbitrage opportunities in general are becoming more difficult to find – evidence that information flow between markets is becoming more efficient.

Together with CNBC, Progress held a well attended event for the industry in Mumbai. The highlight was a panel session which had the deputy CEO of the BSE, a senior member of the Indian securities regulator and a practitioner from a buy-side firm participating. There was a consensus that the continued development of algo trading was welcome in India – bringing technological innovation, putting pressure on costs, bringing liquidity and more competition. There is some caution, particularly when it comes to the unfettered use of algos.  Reference was made to recent talk in the US and Europe about introducing algo “inspection” to provide justification for caution. As I’ve said previously, algo inspection is inherently flawed – it is far better for markets to be protected through good pre-trade risk checks and real-time market surveillance (as discussed at length recently on this blog). The panel acknowledged that real-time surveillance was key for markets to operate well.

Despite the Indian market progressing, there are still challenges. There is obvious enmity between the two stock exchanges that should lessen if and when the organisation behind the Multi Commodity Exchange (MCX) receives an equity trading license, something which is expected soon. The granting of such a license and the introduction of more competition into the market can only be a positive move. Trading costs for equities in India are still high. There are two equity clearers, each owned by the two exchanges which do not interoperate and foreign financial institutions need a license from the regulator to trade and an Indian local legal entity – a process which inhibits foreign firms entering the market and thus reduces competitive pressure on domestic firms.

In my view one change that India will see in the coming years is significant broker consolidation. Currently there are around 3000 brokers in the Indian market. Many of these are small and, in my opinion, will not survive in a market where access to technology will be needed to compete. Many will therefore go out of business or be forced to merge.

The market for algo trading in India is growing. Although it hasn’t reached a tipping point yet, it has all the promise to be one of the most important markets in Asia.

Next stop was Tokyo for Tradetech Japan 2011. I’ll talk about that tomorrow.