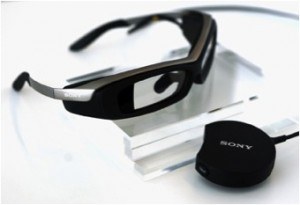 Google Glass may have been the first eyeglass wearable to market, but competition is starting to crop up. Sony Corporation is developing transparent lens eyewear designed to work with compatible smartphones to display information to users.

The Sony SmartEyeglass can superimpose information—text, symbols, and images—onto a user’s field of view when it is paired with an Android smartphone.

The device, which essentially functions as a second display, includes a laundry list of technologies. These include a CMOS image sensor, accelerometer, gyroscope, electronic compass, brightness sensor, and microphone. It also uses the connected smartphone’s GPS to optimize the information it gives the user.

SmartEyeglass also has some augmented reality functions. It can, for example, display information when a user looks at a product. It could also provide facial recognition in social situations or navigation instructions when in an unfamiliar city. Sony has a list of potential applications: providing cooking instructions to chefs, tracking a runner’s split times, showing updates and messages from social networks, or reminding users of appointments in their calendars.

The Business Case for a Workhorse Wearable

Orit Nathan Mahalal, head of content for the binary options trading firm Banc De Binary, observes that introducing SmartEyeglass may be a bid by Sony to both break into the wearable technology market and boost the corporation’s profitability by seeking to capitalize on a nascent technology. But Sony may not pose that much of a threat to Google:

Banc De Binary analysts believe that Sony has potential, but little hope of dethroning Google Glass in the smart eyewear department. Whether or not the eponymous SmartEyeglass will resonate with customers is entirely separate from the fact that Sony already has a prototype available. … Instead of moving forward, Sony decided to take several steps backward.

Mahalal says that the Sony device’s monochrome display and the wired connection between the glasses and power supply will keep it from being competitive. Other technology journalists uniformly commented on the bulkiness of Sony’s prototype devices.

Still, there is likely to be a market for a workhorse smart eyeglass technology, since there are various possible applications for basic smart eyeglasses. Eric Johnsen, APX Labs vice president, told CIO  in early 2014:

I think wearable technology in general is inevitable. In the enterprise, smartglasses bring a tidal wave of economic benefit and gain.... All the workers that are out there with gloves on at an oil pipeline or with sanitized hands working on a patient in surgery, manufacturing line workers, they're not able to leverage the gains of all those investments that have been made in legacy business systems. That’s what smartglasses do.

Although developer prototype hardware is not scheduled to be available from Sony until late March 2015, the company has released the SmartEyeglass SDK Developer Preview. This SDK includes an emulator, which should allow developers to begin creating applications with in-view augmented reality, according to xda portal.