In this podcast Jeff Overton, the Shadow Product Marketing Manager from Progress DataDirect, provides an overview of the DataDirect Shadow platform. This short podcast is 4:46.

You may listen to the podcast here: http://blogs.datadirect.com/media/Shadow_7.2.1_Release_ProductOverview.mp3

DataDirect’s Shadow, at its fundamental core, is middleware for the mainframe. It’s middleware that provides bi-directional integration with mainframes. And when we talk about mainframes, we’re specifically referring to IBM System z hardware running the IBM z/OS operating system. So, in those environments, DataDirect Shadow enables developers, whether they’re using Java or .NET to use a single, unified and consistent approach for integration with the mainframe. And that integration with the mainframe can really span or does span the three primary integration points, which are business logic or SOA programs. So it will be Cobol or PL/1 or Natural or some other language. But it can also integrate with application logic, and, as you’re aware of, applications in the mainframe have a rather lengthy lifetime, so those may be applications where the business logic, the data access logic, and the screen logic were fully intertwined. So it’s a monolithic structure, and the only true way of integrating to that data is through the screens. So we provide support for that as well. And then, finally, data, and whether that data is relational or non-relational, we support both. 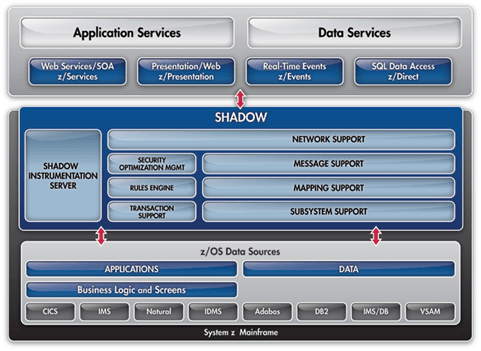 Now, integration with these assets is done using standards. All standards based, whether it be developing web services, whether it be doing web services orchestration, whether it be using SQL to access not just data but also business logic. So the ability for SQL programmers to treat business logic as a stored procedure. Also support for real-time events, which can serve as a very nice complement for services-oriented architecture (SOA), or it can even be used to support change-data capture capability. And finally web presentation. So in those environments where perhaps you have existing DB2 applications that need a quick refresh so that they can be simpler for newer workers to use, rather than having to use PF Keys and old green screen. Those applications can be now presented through the Web.

So, overall, this approach allows an organization to use this single unified approach to mainframe integration, whether they’re doing one of those types of integration, let’s say web services, or more than one, such as web services, data access using SQL, and an event. And the value here is that by doing it in such a manner, we reduce the complexity of the integration process to the mainframe. And, because we’re using standards based interfaces, we’re enabling those organizations to leverage the ubiquitous development skills that are out there in their Java and .NET teams, as well as the tools with they use. So being able to leverage those skills and the tools helps reduce the time to develop and deploy these applications that integrate with the mainframe. And ultimately, what that means is it helps reduce the development costs. Now, once it’s in production, the benefits don’t stop.

So that’s just a quick description of the DataDirect Shadow Product.

View all posts from Jeff Overton on the Progress blog. Connect with us about all things application development and deployment, data integration and digital business.