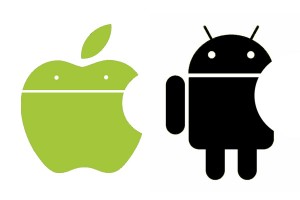 The playing field has leveled between iOS and Android development platforms. Image by Tsahi Levent-Levi.

An international survey of 10,000 software developers finds that the playing field is leveling between Android and iOS and the need for multi-platform development is greater than ever. See the three key takeaways for mobile app developers.

Vision Mobile released the 7th edition of Developer Economics: State of the Developer Nation earlier this month. This report brings the opinions and experiences of over 10,000 developers (across 137 countries) together so they might evaluate current trends, platform consolidation, languages, consumer vs. enterprise revenues, and developer tools and segments.

Whether your business is working to create its first mobile app or you are considering whether to build on your existing mobile strategy by adding in support for additional platforms, three key takeaways from the report may help you to decide on your next steps:

There is no clear winner in the platform race. While iOS claims the majority of the high-end device market, Android is on top everywhere else. Windows Phone has continued to gain momentum but still runs a distant third in popularity, while BlackBerry is all but extinct (though it is worth noting that many models of BlackBerry ship with access to the Amazon App store, giving those users access to Android apps for their devices).

Judging platforms by reviewing smartphone market share is confusing, if not misleading. In the report we learn that Android enjoys 79% of the smartphone market share while iOS lags far behind at 16% -- but what does this really mean? An alarming number of activated Android devices are underpowered, used without data plans, and not located in North America (where many businesses find their target audience).

What these results tell you is that there is no king of platforms. While it may be safe to eliminate Windows Phone and BlackBerry from consideration, if you want to reach the largest audience possible, you have to include Android and iOS equally in your mobile development plans.

Historically, businesses have not adopted an Android-first strategy during the development of their initial mobile app. This trend is changing, with 42% of developers now building Android apps ahead of iOS alternatives.

The most significant reason to watch this trend is because the more Android sees high-profile apps ahead of other platforms, the more users will look to use it.

This isn’t the only interesting change: fewer developers are making platform-specific native apps (those written in Objective-C for iOS and Java for Android). So what are developers considering instead? According to the report, a significant reduction in development costs can be realized when developers harness HTML 5 and Web technologies that are inherently cross-platform.

Whether your business objectives are supported by a free mobile app or you’re trying to make money by selling it (or selling through it), paying close attention to the overall app economy can tell you a great deal.

The news isn’t entirely dismal. When reviewing all revenue sources (meaning in-app purchases in addition to the prices paid through the app stores), it was shown that 1.6% of developers are earning in excess of $500K per month.

It would be nice if there were a clear answer to the question of which mobile platform your business needs to align with. But the reality is that despite Android fragmenting the market with multiple hardware manufacturers with proprietary app stores, iOS isn’t reigning supreme like it once did.

Try to think of it this way: If your business was entirely brick and mortar and your mobile app was the doorway to get inside, could you afford to turn away anybody with one type of smartphone over another?

Thanks to the power of Progress® Pacific™, you are able to build, deploy, and market your Web and mobile apps quickly and easily -- so you can address multiple platforms instead of choosing between them!