Modeling Uncertainty in Rules with a Generic Framework

Model uncertainty in business rules logic within a generic framework, as demonstrated in this short tutorial by Michael Parish.

Uncertainty is part of life. There are things about our daily lives that we can’t predict with any precision. Yet we still have to make hundreds of decisions each day. From whether to turn left or right at a stoplight to deciding if we will issue credit to a new business owner, we use logical models to narrow our choices.

A Case Study in Uncertainty

Suppose I tell you that I have a yellow object and ask you to identify it. The object could be, among many other things:

Given such conditions, how can you model rules to deal with this uncertainty?

Start with a Simple Approach

One approach to our test case is to construct a rule sheet like the one below.

Figure 1: Figure 1: A first approach at solving our “What is it?” case.

Figure 1: A first approach at solving our “What is it?” case.

However, there are some problems with this initial approach:

Reducing Uncertainty through a Process of Elimination

The object will have a number of attributes. Each attribute tells us something about the object—for example, color=yellow, size=small, shape=long—and the value of these attributes  will increase or decrease the likelihood of the object being a particular thing. In this case, a submarine or a banana.

So instead of determining the one thing that the object might be, we need to be able to maintain a collection of possible things, or hypotheses, that the object might be, along with a measure of certainty that it is one thing or another. Then as other rules process the various attributes, we can adjust our certainty. At the end of this process, we can then select the most likely hypothesis.

A Simple Example of Collecting Hypotheses to Adjust Certainty

Figure 2: A map of the rule flow to adjust certainty and reduce the number of possible answers.

Figure 2: A map of the rule flow to adjust certainty and reduce the number of possible answers.

Using Progress® Corticon® Studio, we can use our rule flow map to create a rules vocabulary for our case. 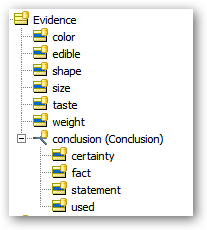 Figure 3: The rules vocabulary for our “What is it?” case.

Figure 3: The rules vocabulary for our “What is it?” case.

With this vocabulary, we can build out our case with rules statements that help narrow down possibilities depending on object values. 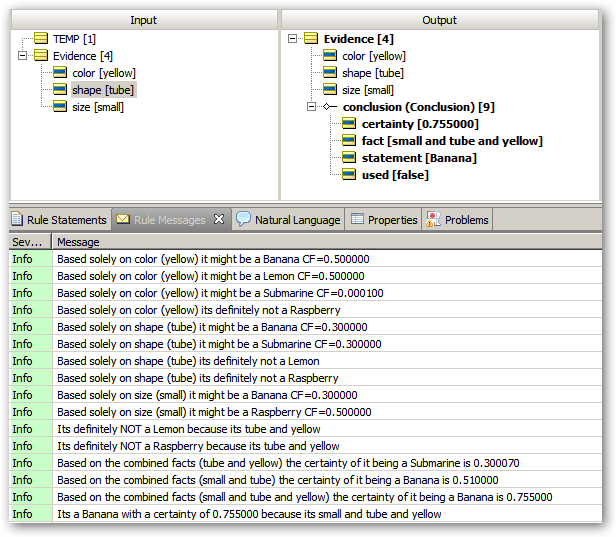 Creating Rulesheets for the Test Case

Given our sample test case, let’s start assigning certainty to the individual attributes considered independently. Please note that these rules and certainty factors are for illustrative purposes only.

Rulesheet for Assigning Certainty to the Attribute “Shape”

Rulesheet for Assigning Certainty to the Attribute “Size”

Rulesheet for Assigning Certainty to the Attribute “Color”

If there were more factors, you could easily add more rule sheets.

Here’s how our rulesheets are implemented into our sample test case:

Incidentally, this rule sheet illustrates a technique for getting around the limitation that Corticon only allows a single cellValue reference in a row. Instead of using a single cellValue, we make use of the TEMP object in action rows A and B to collect all the values to be set in action row C. This concept can be extended to any number of values.

Note that it does not matter which factor you start the rule with first:

Both sequences produce the same result.

Treat the two factors as positive and negate the result:

Rule 3: The rule for adding positive and negative certainty factors

In other words, take the difference and then multiply that value by the reciprocal of the smallest remaining uncertainty.

These three rules provide an interval scale for certainty factors. You will note that you cannot say that a certainty factor of 0.8 is twice the certainty of 0.4. The rules of this metric only involve those of addition and subtraction.

Here are those rules expressed in Corticon:

The Scope section for this rule sheet is shown below. 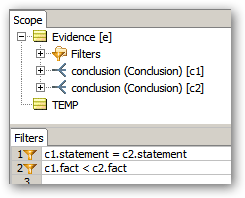 The scope of this rulesheet ensures that we only combine certainty factors that support or contradict a given hypothesis. Note that once we have a certainty factor of -1—indicating that we are certain the evidence does not support the conclusion—then no further positive evidence can change that conclusion.

Determining the Conclusion with the Highest Certainty

You can lower your risk of uncertainty even further by comparing pairs of conclusions and removing the one with the smaller certainty, as shown below:

Figure 11: Rulesheet comparing a pair of conclusions and then removing the one with the smaller degree of certainty.

Figure 11: Rulesheet compare a pair of conclusions and then removing the one with the smaller degree of certainty.

If this rule sheet is disabled in the rule flow, you can see all of the conclusions that were reached with their respective certainty factors. 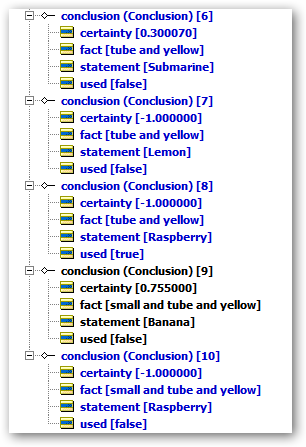 Get the Latest Tips and Tricks from the Progress Corticon Community

Progress Corticon developers and users ask and answer questions about business rules logic in the Corticon Community. From there you can access RulesWorld, browse the Corticon wiki, find the latest documentation and speak with Corticon experts from around the world. 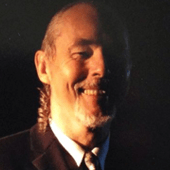 View all posts from Michael Parish on the Progress blog. Connect with us about all things application development and deployment, data integration and digital business.