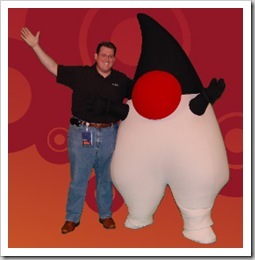 I’ve had a few days to come off of the Geek High that one gets when completely immersed in a tech conference and thought I would write my recap and highlights. First, the opening keynote was delivered by Jonathan Schwartz, and the technology announcements and demos were pretty cool:

As a member of the JDBC Expert Group (EG) going to JavaOne does mean some work. The EG meets and we nail down what we’re pushing into the next version of JDBC (v4.1) which is due out in Java SE 7 next year (I’ll follow up with another post on that topic). This year during that meeting I was asked to present an idea during our BoF session that evening! Not much prep time, but it was really fun anyway. Thanks to those of you who were there and didn’t throw things at me. :)

The final thing I’ll note on the conference was that attendance was around 15,000 – everyone was expecting much lower due to the economy. Those of us who were able to go were excited about Java and where it’s headed (just do a twitter search for JavaOne).  Loads of new technology, performance enhancements, and products to evaluate made for an awesome experience! Here’s to next year and the hope that Oracle keeps JavaOne alive!