Exchange Online 2009 - Behind the Scenes

by Gus Bjorklund
Posted on November 20, 2009 0 Comments
In early Spring 2009, when we began planning our first online conference, we had no idea what to do. We knew that we wanted to do something unique and different, but had no idea how long it would take get things done, what would be hard or easy, or how many people we would need. We didn't even know the right questions to ask. I spent a number of weeks educating myself, looking at and participating in online conferences other companies, universities, and organizations like the Smithsonian Museum were doing. Among other things, I spoke at BravePoint's Virtual InterChange conference, which allowed me to see what's involved in doing a live broadcast.
We eventually decided to do something akin to a TV "newsmagazine" style broadcast with a number of separate programs and "episodes", using a variety of media and techniques. What we produced in the end was, on the one hand, not too far from that, and on the other, not at all like that.
We had numerous discussions about what to do, how to do it, and who we could get to help.  Also many arguments about things which turned out not to be important in the end. Key to helping figure it out and get it all done was Cramer, a production company that has done a lot of work for us in the past for our F2F (face-to-face) conferences and all sorts of videos.
Among the things we discussed endlessly were how many technical sessions we should have and how long they should be. Would anyone come? How long an attention span would an online audience have? How many days would be people be willing to "tune in"? For how long? 2 hours? 4 ?  6 ? Would people leave if there was "dead air"?  What should we do about people in different timezones? How many sessions would we have time to produce? Is live or recorded better? Which is harder to do? We got many different answers to these questions. In the end we decided on two concurrent video "channels" starting with general sessions followed by a series of 30 minute technical sessions with a short question-and-answer period in the last few minutes of each one, and a live discussion channel. The sessions were recorded but the q&a period was live. Would that work? We wouldn't know until we actually did it.
When we opened the conference registration site, we got a huge surprise. After two days, we saw that about two hundred people had registered. Then, over the weekend, registrations spiked up over 3,000 and continued rising. At first we were thrilled. Then we learned that someone had posted a link to our registration page on several sites that enabled people to find places where they could get free stuff. We had free stuff. Anyone who registered would get a free T-shirt. Over 4,000 people who had no interest in the conference had signed up just for the free shirt. What else could go wrong? I loaded all the registration information into an OpenEdge database and wrote a 4GL program to rank all the registrations and identify the bogus ones so we could delete them.
Gradually, things came together and all the speakers got their materials prepared and practiced their talks. In early August, we began filming. I spent 4 weeks at Cramer's studios, working with the speakers while we were filming and then with Cramer's folks (thanks Theo!) editing video while others worked on the web site, registration, promotion, and many other things. It was a lot of work but it was fun.
Finally we were ready. The conference broadcast went live at 8:30 am on September 15. We held our breath. Everything worked, with only a few small technical glitches. Here's a picture of the control room for one of the channels. 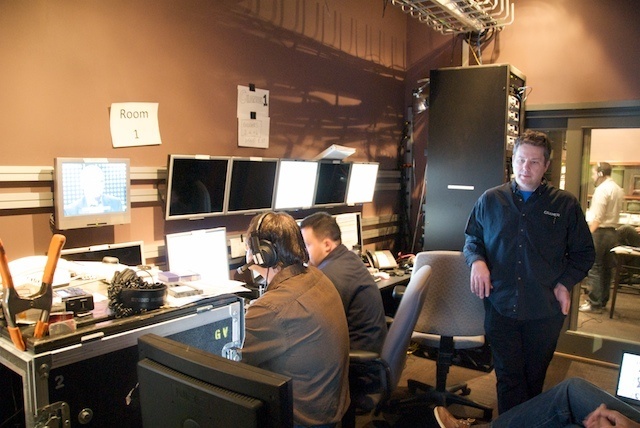 When the broadcast was finally finished on the third day, we were relieved.  We made it.

As we discovered, 30 minute sessions worked pretty well. Almost. In hindsight, we learned that:

0) 23 minutes of content with 7 minutes of q&a time didn't allow enough time for questions for most of the sessions,

1) our speakers were not used to speaking for such short periods and had some difficulty with that,

3) there were (deliberately) no breaks between the end of one session and the start of the next. Feedback says we should have had them,

4) the "networking lounge" and discussions were hard to use and didn't work as nearly as well as they should have. In spite of the difficulty some good discussion did take place.

Still, I think those were relatively small problems.  In the grand scheme of things, I would say Exchange Online 2009 was a success.
Session videos for the Exchange Online 2009 conference are still available for viewing for another month.  If you haven't had a chance to visit, please point your browser to http://events.unisfair.com/rt/exchangeonline~sept2009
4GL application development business applications Cloud development event OpenEdge Progress SaaS

View all posts from Gus Bjorklund on the Progress blog. Connect with us about all things application development and deployment, data integration and digital business.